The Pleiades Cluster appears to be a small group of several brighter stars with a few dimmer companions at a distance of approximately 390-460 light years. I had never thought of the cluster as resembling a “dipper” until being with twenty or so high school astronomy students during a star party to identify constellations. After previously teaching in the classroom about the constellations in the Northern Hemisphere, especially the circumpolar ones,  students had been assigned to try to find the Big Dipper from their home. Many said they had. When using a tight beam flashlight (no laser lights back then) to point out Ursa Major, two students exclaimed, “It’s so big!” Since they earlier reported they had identified Ursa Major in the sky, I looked at them and asked, “Where did you think it was?” They pointed to the Pleiades Cluster and said, “You have to admit it looks like a dipper.” Everyone laughed at the error. They were very surprised constellations were so large, expecting them to be Pleiades size. 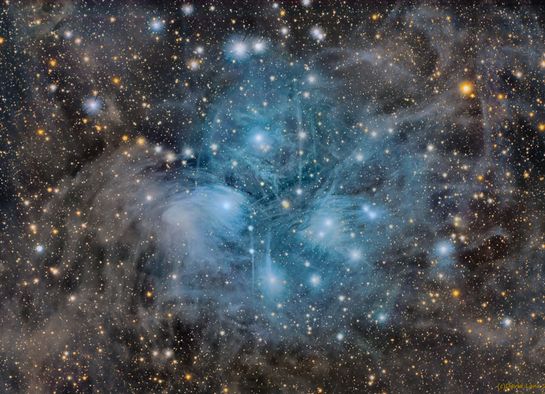 The image above,  courtesy of astrophotographer David Lane ( http://astrogab.us/profile/DaveLane), clearly shows the brightest of the cluster’s young blue stars. When we look at them with our inadequate human eyes, we can see only a few of the 400+ stars within the cluster. The nebulous material surrounding and passing through the cluster is illuminated by their blue light causing the cluster to be one of the more beautiful objects in our night sky. What is fascinating about Lane’s image is the detail found within the nebulous or dusty material illustrating what appears to be streaks of light.

Using the Photoshop CS-5 application, I desaturated the image to black and white. I then darkened the image to remove some glare and enhanced it with contrast. What resulted was a more clear detail of the nebulous gases. At first I thought it was nebulous material surrounding the individual stars. However, the trajectory of the different gas trails appears to move in several directions with a general trending line.  There also appears to be dark areas of matter which may be silhouettes of material resting between Earth and illuminated gases. 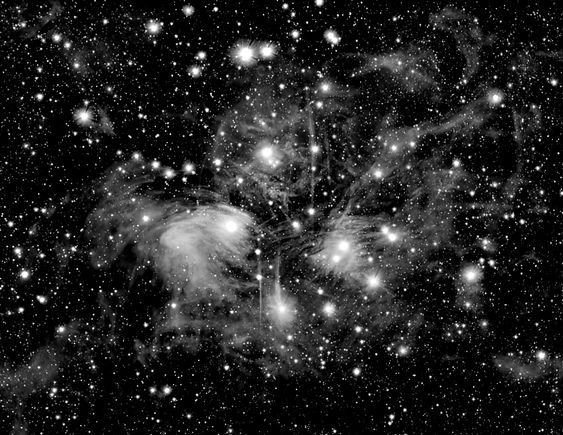 To create a more clear pattern of the gas flow, using red lines I followed the flows to highlight their directions. I ignored all straight lines assuming they were caused by telescope or camera lenses refracting the light. What you see is a gentle flow of lines. According to the information obtained on the 25 February 2014 Astronomy Picture of the day, there is a passing dust cloud called the Gould's belt which has created the gentle flow appearance.  Evidently, just as the solar winds of our Sun push outward, the stars of the Pleiades also have outward pressure creating the billowing of the dust cloud passing through the cluster. The size of smaller dust particles, having less mass, would have less resistance and be pushed a greater amount.  As you can see in the photo above and the illustrated image below, the nebulous dust clouds are thinner in some places and thicker in others.  In addition, there are filaments visible. It is some of the significant filaments which are highlighted in red below. I think they are really beautiful.

Until I learned about the Gould's belt of dust passing through the cluster, in my ignoranceI thought the stars created the nebula. Let me know what you think about the nebulous material around the stars. You can email me at: irenebaron@irenebaron.com . I learn something new every day! :-) 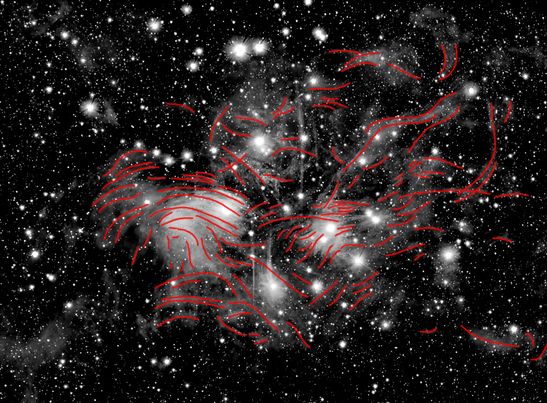