I have been watching the first two videos created by David Allen LaPointe, The Primer Fields-Part I, and The Primer Fields-Part II, concerning the creation of nebulae.   The videos were created to demonstrate the nature of light and other electromagnetic radiation. The information on which LaPoint's theory rests was discovered at CERN. I was particularly interested in the application to nebulae formation. IToggle Full Screen Moden the past, it has been theorized nebulae were formed by exploding stars. 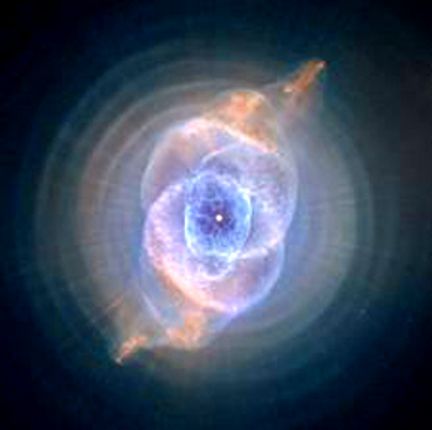 David Allen LaPoint writes: "In this video series the currently accepted theories of physics and astrophysics are shaken to the core by a radical new theory of the fundamental forces in all matter. You will be amazed as a magnetic model of the dome at CERN is used to create a 100 mm diameter plasma Sun with a 300 mm diameter equatorial disc of plasma around it! (PESWiki; January 10, 2013)

LaPointe presents the justification for his theories with excellent animations created for ease of understanding.  With each application he presents an actual nebula matching in appearance the results of the bowl-shaped magnetic field.  His ideas surely open the mind to new applications of data. All laws of nature are maintained in the applications.

I was amazed to watch the comparisons to: Eta Carina, Eskimo Nebula, Nebula M2-9, NGC 6302, Black Widow Nebula, Bubble Nebula, Catseye Nebula, NGC 7662, the spokes in Saturn’s’ rings, and other objects in space.  WOW … it all makes sense now. Like a revelation. He even discusses the formation of the hexagonal shapes such as those found at Saturn’s north pole . What logical explanations for the sights we see in space, on the Sun and planets within our solar system. The Catseye Nebula is pictured to the left. NOW I understand!

In the past, I was using my art background to visualize the spatial aspects of the particles as though they were being driven from an star explosion (nova) outward into space.  This set of videos surely changes my outlook forever.  When a new idea is placed in the mind, it’s hard to go back to what was previously considered without major changes in concept.

Now when I look at nebulae, I shall rethink how these bubbles and masses of matter are created. In addition, with the late discovery of the bubbles of energy above and below our Milky Way galaxy, I can more easily apply LaPoint’s theory. LaPointe presents the later study of the giant out-flowing fields of energy from our galactic center as published by physorg.com. It appears the magnetic nature of our universe is undeniable.

Having written a book (Unraveling the Christmas Star Mystery) which presents information not previously known or even considered, I can easily understand how difficult it is for the public to absorb new information. My information was gathered from researching NASA astronomy computer programs.

There are supposed to be four videos, the rest evidently to come later. You can watch these two videos, each about 1-hour long by clicking on these links:

There is supposed to be a Facebook page by LaPointe concerning the plasma energy changing the world.  If anyone  finds that link, please let me know. Enjoy this blog. It's an eye opener!