The Mindreacher book, scheduled for publication May 2019, has new and complex ideas which startle readers. They are woven into the story as easily as threads are sewn into fabric. This article tells how some of those ideas originated.

First and Beta readers have asked me how I came up with so many astounding ideas in my MINDREACHER adventure/thriller manuscripts. They say I incorporate new ideas into the novels as common in society.

WHERE DID I OBTAIN MY INFORMATION?

I learned much about the military when working with Battelle Memorial Institute, an ARPA contractor in Southeast Asia. There are many sections of the Pentagon and Department of Defense involved in monitoring and coordinating cutting edge research.

I use new discoveries or items in current research by our government and, with permission, from private businesses. After studying all science fields as an under graduate and in graduate school and teaching various sciences, I was hired by Battelle Memorial Institute Columbus as an Information Specialist. To have a broad knowledge across the sciences was a plus.

Many scientists applied their studies to one field, such as astronomy, and became an expert in that field. Having studied all sciences, I was unusual in having the ability to gather data from many areas of study in the creation of analogies and conclusions.

Such a Department of Defense information analysis center was recognized as a scientific and engineering research facility. Scientists and engineers analyze the gathered scientific and technical data information during research to gain information and ensure they are not wasting time in duplication. RACIC answered technical inquiries, conducted special studies, prepared state-of-the-art reports, and provided research and development to support the DOD community. RACIC acquired, organized, stored and analyzed information concerning remote areas of conflict.

HOW DID RACIC OBTAIN THEIR INFORMATION?

International organizations with informational libraries on one or more of those topics were approached by the Battelle RACIC team. The organization was requested to allow Battelle to copy every document in their research library. (If you worked in the private sector, you may have witnessed libraries so extensive that floors had to be reinforced due to the collection weight.)

Once the documents were copied, they were placed for use by others in the program. For a monthly fee, every organization allowing their documents to be included would have access to the RACIC library.  Duplicate information files were/are maintained in the RACIC-Washington office in Arlington, VA. The files are open to all members of ARPA/AGILE and ARPA-approved visitors.

The United States government had interests in Thailand due to the Southeast Asia Treaty Organization (SEATO), an international organization created in 1954 by the Manila Pact. Founders, Dwight D. Eisenhower and John Foster Dulles, helped mold the SEATO Treaty. With SEATO in place, the United States was obligated to help defend all countries signing the document.

The Bangkok ARPA research had emphasis on strengthening counter-insurgency capabilities of the Royal Thai Government. (https://www.gao.gov/assets/210/201228.pdf

WHO WOULD THREATEN THAILAND?

The four years I lived there, invasion threats to Thailand were broadcast almost daily by China radio.

I listened to their English broadcast which announced Vietnam War news before it was broadcast on American stations.

The Ambassador to Thailand had a Special Assistant for Counterinsurgency who coordinated and supervised the counterinsurgency activities of the U.S. Mission. Both military and nonmilitary assistance was directed to the communist threat.

To put that in simple terms, the work I accomplished was with the highly classified Mekong River Project. Information was gleaned and compiled for troops during possible future conflicts along the Mekong River bordering Thailand, Laos and Cambodia. When reading our document, military command would know safe crossing sites of the Mekong, where to find boats and overland transportation, location of potable/safe drinking water, village maps with political/social information, trails, roads, etc.

At that time, few places upcountry along the Mekong River had electricity. To compensate, the village leader would be given a portable radio with batteries. That radio was placed on a high pole on Saturdays for the local citizens to hear government news broadcasts. Village leaders occasionally received information from traveling authorities.

WHAT DID I DO FOR RACIC?

My work involved all aspects of aerial photography along the Mekong River bordering Thailand, Laos and Cambodia. This was accomplished from Air America helicopters and airplanes equipped with the photo op reinforced 1-2’ square openings in the floor of the fuselage. As far our team knew, there had been no cartography work in Thailand prior to the Vietnam War. The geology and hydrology data I compiled and wrote for the Project used the aerial images.

DID I HAVE ANY PROBLEMS? 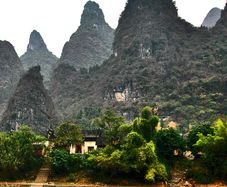 Other than the helicopter being grounded during sudden storms in a unusual terrain, being shot at from the ground and frightening people who had never seen blonde hair and blue eyes, I had an editing problem.

The editor of the my written Geology section of the Mekong River Handbook had no geology or science background. When I included pertinent data about the karst topography which troops would encounter, the editor insisted they be called “small hills.” I contacted Battelle Columbus and objected, to no avail. I still cringe thinking of future troops using our manual during deployment and arriving in a karst area. They would be totally unprepared for the difficult terrain. I imagine their language would be very colorful!  As our book was classified Top Secret, I could not keep any of my photographs. However, to the left I included an image of karst from a USGS website. Does that look like small hills to you?

WHAT ABOUT THE FRENCH MAPS?

If the French created maps when they fought in Vietnam, they didn’t leave them behind. The only maps to which we had access prior to the RACIC work were those made by petroleum companies advertising fuel stops. It was frustrating to learn ground maps had been available from another ARPA project after completion of the Mekong River Project. Too much secrecy!

HOW DID I LEARN TO ACCOMPLISH TECHNICAL WRITING?

This type of coursework would later lead to internet word retrieval systems. ARPA had a direct role in such internet creations and usage. I was trained to read material and put the data of books provided into 4-5 descriptor words. Those few words would be used for accurate document retrieval. This system was later used by internet search engines where a word or two would retrieve data.

When I arrived in Bangkok, the Information Specialist office building was still under construction. With my intense science background, I was moved to the Top Secret,  Mekong River Project. That project had also been contracted to Battelle and was under the direction of the Office of the Secretary of Defense, Advanced Research Projects Agency, Research & Development Center, Thailand  (OSD/APRA.R&D Center/Thailand).

TELL ABOUT MINDREACHER AND TERRORISTS

Book 1 of my MINDREACHER  sci-fi thriller series has remote area conflict primarily in Laos. During combat, the elite U.S. Marine Corps character (Major Jon Coulter) has to choose between following accepted military tactics or instructions from a government hired telepath. The futuristic gadgets used in the story as commonplace will remind you of a James Bond novel. Imagine James Bond being stuck with a telepath!

I hope you look forward to some fun and pleasurable reading when Book 1 of the MINDREACHER series is published. Yes, there is some humor in it. Expect to be surprised.