Teaching Forensics at Glasgow High School in the Newark, DE area beginning 2008, I needed some demonstration objects. My students were required to determine the order or progression of bullets passing through a glass window and determine each bullet origin point. The problem was, I didn’t have any glass with bullet holes to use during class.

A retired US Marine Corps officer, Hudnell Lewis, M.D.,  and his Marine friends back in Ohio learned of my predicament and came to my rescue. They were determined to help students hundreds of miles away learn more in the field of Forensics by providing the different types of glass hit by a variety of bullets.

The glass was provided free of charge by the Zanesville Glass company on Linden Avenue. Not only did the glass company cut the glass to the correct size, they provided window glass with different thicknesses, Plexiglas, bullet proof glass (about 1-inch thick), and laminated glass from car windows.

At their own expense, the Marines:
1.       Contacted the glass company to order different glass types by size
2.       Picked glass up from Zanesville Glass company
3.      Transported glass carefully to the Morgan County firing range
4.      Set individual glass specimens up one at a time for bullet impacts
5.      Shot each glass with about different weapons
6.      Cleaned/ brushed glass specimens off
7.      Cleaned broken glass from the site
8.      Brought specimens back to Zanesville
9.      Cleaned every firearm used in the project
10.    Packed the glass for shipping
11.    Shipped them to me from Zanesville, Ohio to Glasgow High School in Newark, Delaware 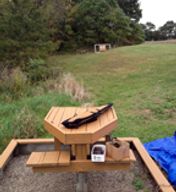 I was amazed the Marines would spend so much of their personal time to achieve this. That took a tremendous amount of time out of their busy lives!

The packing of all that glass in several packages was sent through the US Postal Service. I was informed later by the local Delaware police that the arrival of the packages at the post office raised levels of concern.  This was after 9/11 when post office employees were on the look out for questionable materials being transported across state lines. Postal employees evidently either opened the boxes or X-rayed them, for they contacted the local police to inquire if the packages should be sent on to the high school. Since I had worked with the police as speakers in my Forensics classes on several occasions, they were familiar with my program. Therefore, when the post office manager asked them if it was safe to send the glass on to me at the school, they stated it was safe. I received the material with none of the pieces broken. Another box was sent with bullet specimens of each size bullet used. For safety, none of the bullets were packed with powder.

The state of Delaware is small with a the population around 946,000. To put that into perspective, Columbus, Ohio has a population of about 2-million. It seemed that no matter who you were in Delaware, you were known by others who were not neighbors or fellow employees.  For example,  I was in a Wilmington, DE hotel during lunchtime one day when there was a law enforcement conference going on. I overheard a uniformed officer inquire who I was. The uniformed gentleman who answered told him my name and that I taught Forensics at Glasgow High School. I didn’t know either of them. I wondered how they knew my name and occupation. I had only lived in the state 1-1/2 years and didn’t think that knowledge was common. It was at that point I realized how small Delaware was. 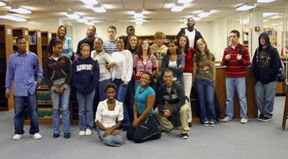 My students, upon seeing the glass samples, were amazed that retired Marines several states away would take time to do something for them.  They were impressed and grateful.

There were six samples of each window glass with the different bullet holes. The holes were placed so that one was far enough away from the others that its impact site was not affected by other bullet holes. There were 3-4 bullet holes close enough to one another that the cracks running through the glass met. It was from the interactions of the cracks within the glass that the students could see which bullet impacted the glass first, second, and third. I think they were amazed that, in most cases, the correct conclusion as to impact progression was easy.

I didn’t think to take pictures of the glass specimens. They were awesome to see. When I returned to the school a year after having to move to another school, the glass was nowhere to be found. I was disappointed as I wanted to ensure it survived. It was to be taken to the National Rifle Association building where they were to have been stored for all the different students training how to use a firearm. I hope the Forensics teacher at that time had them under lock and key. I was told upon arriving at that building that everything was to be padlocked or would be stolen.

That Forensics class was one of my favorites to ever teach for several reasons. It encompassed all the other sciences into one class. My students had to already successfully complete Physical Science, Earth Science, Chemistry and Physics BEFORE they could sign up for Forensics. The students were college bound and excited to learn. I loved them all. They made every day of teaching a pleasure.

I was told the Forensics class instructor prior to my being there primarily showed movies from television. I had about 5-students drop the course because no television movies were scheduled to be shown.  Others signed in to the class as it was no longer considered an “easy grade” or “waste of time” class. They wanted to pass college entrance exams, SAT, etc. They hadn’t signed up earlier as the class was not previously highly regarded as educational. It was pleasant to know the students in the class wanted to learn and accomplished that goal!

The Forensics I taught included:

More information about the Forensics course I taught beginning in 2008 can be found at: http://www.christina.k12.de.us/glasgow/Forensics/index.htm