I would like to introduce the Martial Arts form of Shaolin Kenpo. The hero of my fictional paranormal MINDREACHER thriller and adventure series, Major Jonathon (Jon) Coulter of the U.S. Marine Corps, is an expert in the Shaolin Kenpo Martial Arts. This is a lethal form of combat which he uses in a Laotian mountain cave to save the heroine. I think you will enjoy reading about his fight.

This original and unique form of Shaolin Kenpo Martial Arts, also known as the “Father Art,” is not usually discussed or studied in the United States even though it originated over 1600-years ago. The acrobatic art has since evolved into other fighting forms. 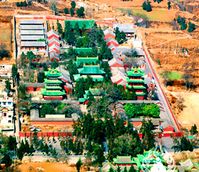 he origin of Martial Arts is believed to be from the Shaolin Temple. This temple is found at the Westerm end of the Shaoshi Mountain range in Dengfeng City, Henan Province in China. The temple compound is supposedly surrounded by forests and hills, a natural defense. The image of the 1500-year old Buddhist Shaolin temple is courtesy of the Shaolin Organization (www.shaolin.org.en) in China. The word “Shao” refers to “Shaoshi Mountian” and means “forest” and “temple.” The name “Shaolin Temple” literally means “temple in the woods of Shaoshi Mountain.” Housing over 3,000-monks at one time, during its most popular period this sacred temple was often visited by emperors and military generals. A 40-day blaze destroyed much of the temple in 1928. It has been under reconstruction since then. Read more history at: http://www.shaolin.org.cn/templates/EN_TG_new_3list/index.aspx?mpdeod=578

The origin of the spiritual and technical aspects of Shaolin Kenpo Martial Arts fighting have been traced back over 5,000-years ago. The first major Shaolin Temple was built in 495 A.D. by Emperor Xiaowen for an Indian monk. The first Buddha arrived 32-years later to teach in the temple which is now recognized as the origin of Chan or Zen Buddhism. Originally created to strengthen the weak monks, the Kenpo Martial Arts began around 526 A.D. It was used as a means for the temple monks to defend themselves against robbers and warlords. The practice evolved into fierce fighting skills with practitioners bodies becoming hard and muscular. It originally involved 18-exercise routines to produce fighters with correct breathing, posture, torsion (balanced twisting of the body), total body balance and strengthening of muscle, mind, and spirit. The original 18 moves have evolved in number to almost 200. They have become the basis of other Martial Arts later known in Japan as Aikido, Judo, Jujutsu, and Ninjutsu.

A monk trained in the original Kenpo style of fighting used staffs, spears, or open palms while in a standing position. It took five dedicated years to learn the skills of becoming a trained Kenpo warrior monk. The annual goals included: Year one-physical and mental vitality; year two-blood circulation and balance; year three-cultivation of organs and body flexibility; year four-improvement of body energy networks and internal organs; year five-cleansing of the skeleton and nurturing the brain. This type of fighting became so superior, legends tell of 108-Shaolin Kenpo Martial Arts monks defeating 10,000-Manchurians while not sustaining one injury in the year 1644.

Being vegetarians, the Shaolin monks and would not harm animals. They would, however, kill others to protect themselves or the weak. To not kill biting insects, they attached bells to their walking staffs in order to frighten insects away. As time passed temple monks became warrior missionaries to help spread Cham Buddhism, later called Zen.

The one person who has been considered the best martial artist in history was a Taoist, Chang Sanfeng, a Sung dynasty genius with superior physical abilities. His prowess allowed him to become a full-fledged master in less than two years at the Shaolin temple. He became so great that numerous pupils of the Shaolin Temple defected to him, creating a great rivalry. His followers are the ones who later burned the temple.

Taoism is a religion founded in a most unique way. According to my professor of World Religions course of study during my college years, an elderly Chinese gentleman had traveled on the Great Wall of China. When he tried to exit the thoroughfare he was asked to pay the toll fee. Unfortunately he had no funds. The only thing of value he did possess was a book he had written by hand. He left the book with the guards working at the toll booth as temporary payment for his use of the Great Wall. When the elderly gentleman did not return to claim his book, the guards decided to read it. They were dumbfounded at the wisdom it contained. That book became the Bible of the Tao religion.

The Shaolin warrior monks later founded the then secret Ninjas style of fighting. Ninjas excelled in guerrilla warfare tactics and were the first warriors to use bombs, booby traps and hidden weapons. 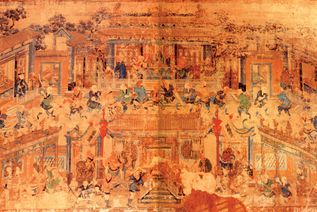 Pictured to the left is a large wall mural at the Shaolin Temple depicting some of the Kenpo methodology. This image is from the Shaolin Temple organization. I have also included two ink sketches I made from the same mural. The sketched figures are not anatomically correct and may look unusual, but the original art figures were also imperfect.

If you search the Internet for later forms of this Martial Art, you will find the spelling as "Kempo." 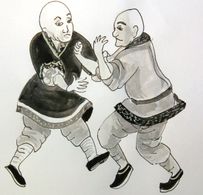 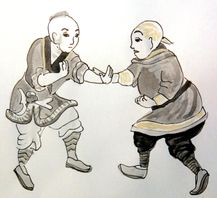