Hillsdale College recently reprinted a 1992 article refuting the Christmas star. I felt compelled to contradict the article’s conclusions with fact.

Since the article was originally composed in 1992, the author (Craig Chester) had not yet read my research proving the existence of the Star of Bethlehem, the Christmas Star.  Research proving the Star of Bethlehem is discussed in the book, Unraveling the Christmas Star Mystery ( https://www.createspace.com/3912313.)  This book is an award winning, nonfiction publication of research based on over 50-NASA sponsored astronomy computer programs and a deep study of Archaeoastronomy. Computer programs and Archaeoastronomy references are listed at the end of this article.

Archaeoastronomy is primarily based on studies of ancient cultures with their astronomy, astrology or cosmology practices along with lore and religions. It can be based on:

Author Chester erroneously assumed when the ancient astronomers used the word ‘star,’ they were referring to what we consider to be a ‘star’ in this century.

‘Star’ currently refers to a luminous object in space giving off its own light, such as our Sun. Nonluminous objects in our Solar System are visible only when light from our Sun reflects off them and enters our eyes.

Ancient astronomers of 2,000+ years ago believed everything in the sky was a god. Except for the Moon and Sun, everything was a ‘star.’ They did not know of planets or that planets revolved around the Sun. They called planets moving across their sky field of stationary stars, ‘wandering stars.’ With movements of these objects mathematically precise and predictable, the ancients had the knowledge to map them years in advance. When they discovered stars predicting the birth of the greatest God in the universe, they did so early enough for their leaders to plan and execute diplomatic entourages to visit the new God king.

We know there were a minimum of three caravans/entourages from regions to the east. According to the prophecy of Isaiah, 60:9, one group may have begun their trip on Tarshish ships “from afar” with their silver and gold, such as from India or China, countries which in ancient times supported astronomers for prediction purposes.

The celestial movements of sky objects were used to foretell the future of their world for emperors, kings, head priests, etc. Their findings were based primarily on the thousands of beliefs originated and documented by the Babylonians.

If you asked present day persons to look up on a clear night and distinguish between planets and stars, the majority will not be able to do so. They assume all those little points of light are stars. They don't observe them enough to realize they have colors other than white.

The basic Hertzsprung/Russell diagram, shown to the left, illustrates by temperature and luminosity of visible stars and shows the colors of each type of star. Understanding of this diagram is taught in high school Earth Science and Astronomy classes. 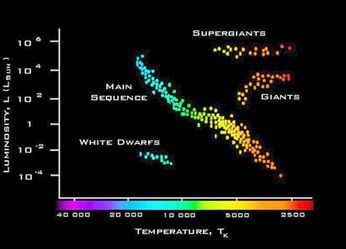 The most important fact to know is that ancient astronomers used dawn to make their celestial observations.  It would be impossible for anyone not using the dawn timeline to locate the true Star of Bethlehem. Observations and searches other than dawn would result in failure.

Since most current, observatory-linked astronomers use visible light telescopes at night, astronomers sometimes stay up all night to observe, photograph and document findings. In the past, astronomers fluent in all things astronomy but not history, erroneously assumed the Star of Bethlehem occurred after sunset. Without studying Archaeoastronomy, modern astronomers have been unaware sky watchers of 2000+ years ago did NOT make celestial observations at night.

When I used NASA programs to find the Star of Bethlehem, I used the latitude and longitude coordinates of the current Bethlehem at the set time of 6:00 AM for 15-years of dawn observations.

Chester did mention Star of Bethlehem event would have to have astrological significance to ancient astronomers.  As previously mentioned, significances of celestial object positions, conjunctions, eclipses and other occurrences were based on Babylonian records which were handed down and used for thousands of years. Babylonian records are still used in present day astrological studies to determine horoscopes for individuals dependent upon the individual’s birth time and date.

THE STAR OF BETHLEHEM 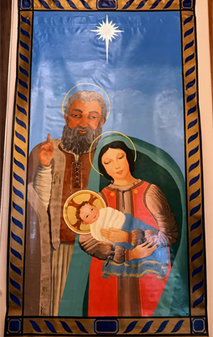 Within a fifteen year study of dawn skies, I found only one object passing directly over Bethlehem. It was a wandering star, or planet, we call Saturn. This wandering  Star of Bethlehem, was used by the ancients like we use a Geographic Positioning System, a GPS. Saturn was only a position marker.  The position marker 'star' did not tell who was being born. The 11'H X 6'W image to the left, a wall mural by the author, was created to depict the Holy Family under the overhead Star of Bethlehem or Christmas Star. It was created on a flat, horizontal surface and had just been hung vertically in the sanctuary of Coburn UM Church in Zanesville, Ohio. The canvas imperfections will hang out with time.

What I found in my research of the skies were nine earlier celestial messages describing who was being born and the significance of that birth. Finding such announcements/messages occurring within a few months of Christ’s birth was astounding and must have overwhelmed the ancient astronomers. The significance of the evens would have been understood with the resulting symbolism and interpretations using the astrology and cosmology that had been handed down for centuries since the time of the Babylonians.

As each significant celestial occurrence was taken into account, using ancient symbols and symbolism, the messages described how the new God being born would be superior to the current sky gods. Major sky gods bowed before the new One within a few months of His birth. Ancient astronomers were probably trembling in their sandals for this was the first God to be born on Earth.

Fortunately, the mathematically brilliant astronomers in different countries could predict sky events years before they happened. This allowed time to assimilate facts. Being important personages in their own right, they informed leaders, and perhaps help decide who would be chosen from their country to greet the new God following the royal or official protocols of their homelands. Logistics for the entourages would take place. Priests and nobles in of the nations involved must have jockeyed for permission to be included on the trip in order to witness the new God king. Decisions had to be made concerning what gifts to present to the new God, what to wear during the presentation to bestow honor, posture and protocol during presentation, etc.

WHAT WERE THE FIRST EVENTS TO FORETELL JESUS CHRIST”

The celestial events which explained what God was being born and the importance of that God began on 1 July, 4 A.D. The book, Unraveling the Christmas Star Mystery, lists each event with the facts and ancient symbolic interpretations. Other events followed on 25 August, 30 August, 31 August, 1 September, 2 September, 15 September, 20 September and 1 October. The Star of Bethlehem, the Christmas Star, moved across the sky beginning 20 November of that year. It continued to rise in the sky to make the announcement concerning the location of the new God’s birth place. As the astronomers watched, Saturn, the father of kings moved toward the west as they would have earlier predicted. In early December Saturn would have appeared to be almost over Bethlehem at daybreak. The astronomers, with their mathematics and planning, knew all these celestial events would happen and knew when and where they would all end. By going to the location below the Saturn god, they would find the birthplace of the new Earth-born God.

According to historians, the location of Bethlehem has changed several times in 2000+ years. Since we don’t know the exact location, the actual birthdate cannot be known. We do know Jesus Christ must have been born in the first week of December.

I used the Bethlehem location of 31o 40’ North of the equator and 35o  20’ East of the Prime Meridian for the place of Christ’s birth.

WHY DOESN’T THE BIBLE MENTION OTHER STAR EVENTS?

The Bible only mentions the position marker star. It does not mention other significant celestial occurrences which must have been important in determining who was being born and why that birth was important. Why is that?

In Matthew 2:2, Wisemen from the east asked Herod, “Where is He who has been born King of the Jews for we have seen His star in the East and have come to worship Him.” The Greek phrase, “in the east” translates to an object rising before the Sun, a dawn observation.

Herod did inquire of his chief priests and scribes who this ‘King’ was. Matthew 2:6 reports the chief priests told Herod of the ancient prophecy, ‘But you, Bethlehem, in the land of Judah, are not the Least among the rulers of Judah; for out of you shall come a Ruler, who will shepherd My people Israel.”

Nowhere in the Bible is there mention of how much time passed between the arrival of the Wisemen to Herod’s court and the time Herod sent troops to kill all male children in that region of age two or less. Many have assumed it to be 2-years but it may have been less. Herod logically gave an extended 2-year order to ensure he didn’t miss slaughtering the newborn Jewish King.

WHAT’S THE PROBLEM WITH THIS SCENERIO?

Present day Religious leaders are told to preach what is in the current Bible and not veer from it. If they advocate something not in the Bible, they may lose their right to be a pastor or religious leader and/or be ousted from the church.

Through the use of computers and facts from studies of Archaeoastronomy, the true Star of Bethlehem story is now known and may be used in religious settings. What may not be used is the information about the previous nine birth announcements.

Binford, L.R. In Pursuit of the Past: Decoding the Archaeological Record. Thames and Hudson. New York. 1983.

Dreyer, J. A History of Astronomy from Thales to Kepler. Heath. 1953.

Thompson, R.C. editor. Volume II. The Reports of The Magicians and Astrologers of Nineveh and Babylon. Luzac & Co. London. 1990.