Did you ever wonder why your “first star” wishes never came true?

Many families enjoy summer nights by sitting outside to cool off after a busy, hot day. Taking a blanket as a “sit-upon” or lawn chairs may be all that is needed to get comfortable and relax in the fresh air. Lemonade for the children of all ages and perhaps iced coffee or tea for the adults will provide all the refreshment needed, if any. 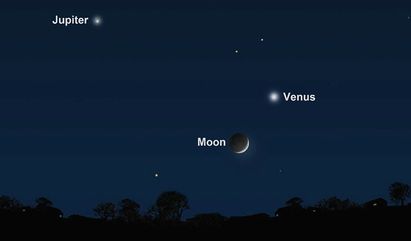 When the family goes out before sunset, parents can have their children spend time looking for and anticipating the first star of the night. Not only does that give the parents time to talk to one another, it gives the children an activity they can share with their parents. The many spring, summer or fall evenings my family visited outdoors in the back yard when I was growing up were some of the most memorable events we shared. I remember searching the skies trying to be the first one to spot a star. When someone did spot the first star, they would point to it and let everyone know where it was so they could recite the “twinkle” poem or sing it to the familiar melody, and then make the much anticipated wish.

The star we always saw first was usually in the west. It always surprised me for I thought the first star would be where the sky was more dark in the east. The brilliant setting Sun usually blotted out stars. Or could it be that as we watched the changing colors of the sunset sky and/or clouds, we were facing west. Regardless, I don’t think we ever saw our first star in the east.

That wish was significant to me and usually not on a whim. Sometimes, sitting in the high reaches of the old maple tree in our back yard during the day I would think about what I wanted to wish for. It was usually a wish for something having to do with the next day or week, like winning at the Monopoly or checkers games. It may have been something impossible like a backyard swimming pool, an airplane or train ride, or attending the Ohio State Fair. With the family business my parents were pretty homebound and we didn’t get to do much. Patrons called my parents almost 24-hours a day to get something they “forgot” to buy and desperately needed as they were in the middle of plastering, painting, or remodeling their home.

I don’t remember any of my wishes coming true. Some must have been forgotten by the next day. It wasn’t until I took my first astronomy class that I found out why none of my wishes came true.

My astronomy professor discussed the difference between stars and planets. He mentioned that stars appear to twinkle due to the high winds in the upper atmosphere. Sometimes a planet may appear to twinkle, but viewed next to a star they appear very steady. When viewed from outer space, such as from the Moon or a space craft, neither stars nor planets twinkle. The BBC picture for Jupiter, Venus and the Moon during one night in May 2015 shows the difference in brightness and size of the planets VS the background stars.

The first “star” we saw most evenings was usually a dim pinpoint of steady light which brightened as the sky around it darkened. Then it would shine brighter than most of the other stars as evening progressed. As a child, I had no idea that what we all thought was the first star every evening was a planet. I was in the 6th grade in grade school before I even learned about planets. The "star" we saw changed in brightness over the months. That is caused by Venus orbiting the Sun and having only the side facing the Sun lit. That motion creates phases to Earth viewers, much like our Moon has phases.

Those phases are illustrated to the left with the Wikipedia image.

So, according to the poem/song about gaining a wish, the wishes had to be made upon the first star. Therefore, if what we saw every evening was NOT a star, none of our wishes could ever come true.

If YOU went outside the next clear night, would you be able to tell the difference between the stars and planets? People over the eons have had that difficulty. People in ancient times thought everything in the night sky was a star. That’s why they called Saturn, the brilliant night object used as their GPS to find the birth site of the first God to be born on Earth, a star. (http://www.amazon.com/Unraveling-Christmas-Star-Mystery-Illumination-ebook/dp/B00JATRDMU/ref=sr_1_1?ie=UTF8&qid=1432385494&sr=8-1&keywords=irene+baron

Then, what were we seeing in our back yards when we thought we found the first star? Most likely Venus. It could have been another planet like Saturn or Jupiter or Mars in opposition when they were most bright, but Venus reflects the most light and is the most brilliant. Of the objects in our night sky, the brightest is the Moon. The second brightest is Venus. It reflects over 70% of the sunlight hitting it. Venus has been so bright in the past it has actually cast a shadow. The star Sirius is the third brightest object in our night sky.

In conclusion, all those who wished on the first star were most likely wishing upon a planet. Therefore, any wish made upon that star that came true did so not because of the ‘star’ and poem, but perhaps because of coincidence.