Many adventures in my life have been great learning experiences.  One was being associated with a US Navy airplane, the historical Grumman S-2 Tracker. 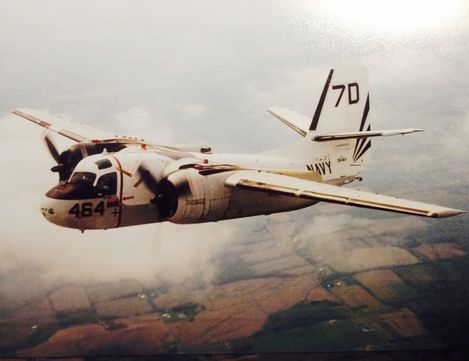 The S-2 Tracker had been transported during wartime on aircraft carriers and used as an antisubmarine search and attack aircraft.  First flown in 1952, the total built was 1,342. They were disestablished in 1976. Most people would remember the airplane as the one with wings that folded upward in order to take less space on the aircraft carriers.

I became acquainted with the USN S-2 Tracker through a very dear friend. Her pilot husband, Mr. Art Moose, was involved with Tracker at the Lancaster, Ohio airport.  The warbird had been purchased by a Mr. Alton as a gift to the Historical Aircraft Squadron Museum located at that airport. Until that time, none of the airplanes owned by the museum were in flying/working condition. Mr. Alton wanted the museum to have one which the pilots could fly. Alton told  Moose that he would purchase the aircraft if Moose would fly it. Not rated for the Tracker, Moose replied he would as soon as he had the correct rating. He contacted Mr. Walt Newton to provide the necessary training. When Newton agreed, Moose took the training and became the pilot in command (PIC)for the warbird.

With the avid support of his wife, Art Moose has been a gentleman who would volunteer to help restore airplanes whether they were for an individual or an organization.  His expertise at anything involving machines appears like a miracle to me, for he can literally accomplish anything mechanical. A few of his accomplishments are humorous, like the golf cart with such power it could do wheelies, or design the planning for a golf cart having a jet engine for power. To watch Moose take an airplane from the beginning to end restoration process, including all mechanical work, was a marvel. He also designed and applied final decorative paint jobs on the exterior of the aircraft. All mechanical work he accomplished was approved by representatives of the Federal Aviation Administration (FAA).

Although I am a pilot and know an airplane is well balanced, I never knew how well until I saw the hanging, wingless, fuselage Moose suspended by cables in his hangar. The airplane was suspended at the front and back ends, each with a small toggle. The airplane was so well balanced, it would rotate freely by touching it gently with your finger. I was impressed, as was my cousin who was visiting from California.

Moose decided the he would like to have some art work completed, such as you would find on the nose of military airplanes.  I was asked to create the painting on the Tracker trailer which was used to carry equipment and parts for the warbird. I agreed to volunteer a little too fast, for I thought the white trailer outside walls were going to be flat and easy to paint on. They were not. They were grooved. That made the painting take twice as long and became twice as tedious. However, painted identically on both sides of the trailer, the design turned out very well. It took a long time with the acrylic paint and all those grooves, but looked great. I had Art cover the paintings with a sealer in order to keep the weather from destroying them.  The design was of a beautiful young woman sitting on a torpedo, waving her arm as though riding a bucking bronco. If I find a photo of it I'll include it with this blog later.

Since I worked so diligently many hours, I was given the honor of having my name placed as a crew member on the outside of the aircraft. That honor was dependent upon the hours an individual spent on the overall Tracker project. WOW! That designation was very special to me.

As a professional aerial photographer and former member of the Professional Aerial Photographers Association (www.papainternational.org) I was asked to take aerial photos of the Tracker out of Akron, Ohio. I no longer have the original digital images, but copied one as pictured above.  The smaller aircraft I was in left the airport earlier. Once we were at top speed, the Tracker took off. When the Tracker flew close to us at what was almost a stall speed for them, I snapped as many pictures as I could. We were going as fast as we could while they were going as slow as possible with that aircraft. The normal cruise speed of the Tracker was about 150-160 miles per hour. Dave Alton, son of the purchaser, flew as co-pilot during this aerial photography session.

The aircraft was purchased later by someone who sincerely appreciated the airplane. He keeps it still protected in a hanger owned by the Military Air Preservation Society (MAPS) in Akron. Their URL is: http://mapsairmuseum.org/. I drove to Akron a few times to see it. The picture below left was taken at the MAPS location. I wanted it as a record of my name being listed as CREW member of the aircraft. To me that was VERY unique.

There is a great feeling of excitement being on such a historical aircraft whether it's in the air or not. I enjoyed seeing it when displayed for the public at the Akron air shows. It is great fun to talk with pilots. Every pilot I've even known, beginning with my Uncle John(Jack) Moore of the United States Air Force, have been kind, intelligent, alert, and are some of the most wonderful persons you would ever meet. For a short time I was President of the Warbirds & Support Preservation group which was organized primarily to support that particular S-2 Tracker.

If you want to see this particular warbird, you can find it at the MAPS Air Museum at the Akron/Canton Airport. It's worth the trip. 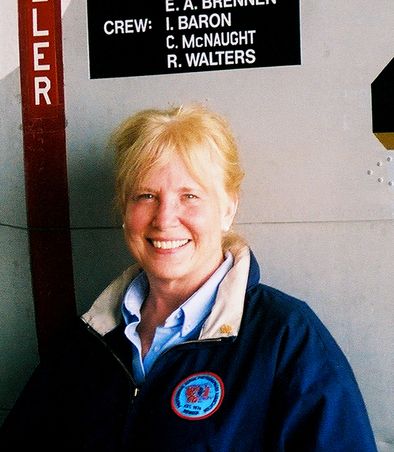 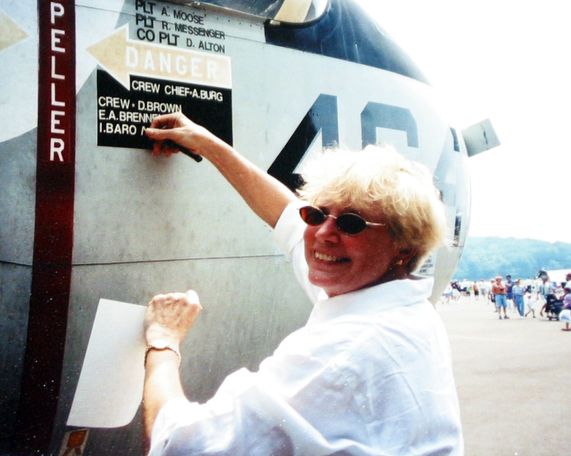