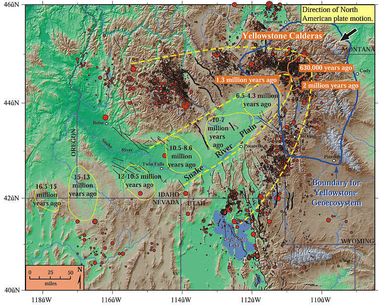 Big Bear Lake National Park is located in the San Bernardino Mountains about 93 miles NE of Los Angeles in the volcanic Cascade Mountain Range. This region has been an area of tree deaths since the eruption of Mt. St. Helens volcano in the 1980’s.

When Mt. St. Helen's first began awakening and rumbling, so did all the other volcanoes along the Cascade Mountain Range, including those in the San Bernardino Mountains.  The awakened Cascade Range’s volcanic activity has not ceased since that time and has increased in some areas.

The shifting of major continental plates along the Pacific Rim created the Cascade Range as the floor of the Pacific Ocean rammed under the North American plate. The North American Plate movement over the ocean plate is primarily toward the west at less than a centimeter per year. One inch equals 2 ½ centimeters.

When the water-filled ocean plate being pushed under the continental crust reached hotter regions, it’s rock melted, became less dense and rose to form volcanoes at the Earth’s surface. That line of volcanoes became the Cascade Range.

When the trees along the Cascades began to die, biologists were called in. At Big Bear National Park, it was originally believed at first that tree deaths were due to insects or fungi. It wasn’t until geologists were called in to investigate that the region was found to have helium rising from deep underground. Helium causes death to tree roots. It may be the dying trees attracted more insects and allowed fungi to grow.

Helium is the second lightest gas present on and in the Earth, hydrogen being the lightest. According to the United States Geological Service (USGS), helium has been accumulating in the Earth’s crust for millions of years. When the ground becomes warmer due to rising magma and expands, helium previously trapped in the ground begins to rise.

The release of helium at the Earth’s surface is evidence of magma moving underground.

Rising helium has been discovered in other volcanic areas, including Yellowstone National Park. That park is located nearer the center of a continental plate where it sits over a “hot spot” deep under the Earth’s surface.  The hot spot may be a weak area where magma from the Earth’s mantle is able to push through and reach the surface of the Earth. To the left is a USGS map showing the movement of the Yellowstone hot spot. https://volcanoes.usgs.gov/volcanoes/yellowstone/geo_hist_eruptions.html

The amount of helium being released from the ground at Yellowstone, park officials estimated in 2018, would fill a Goodyear blimp every week. When evidence of an increased helium release in Yellowstone National Park was discovered, scientists knew magma was moving.

That magma moves beneath the park is not alarming. The evidence is in the written history of Yellowstone earthquakes, changes in thermal activity of geysers, hot springs and boiling mud pots. There have been recent changes in lake levels and fluctuations in land elevations as measured by satellites. Magma in the past has moved up and then receded causing the ground surface to rise and fall. Right now, there appears to be a larger than normal increase in helium release and increases in land elevation. 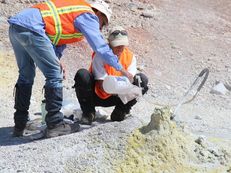 To determine the increase in the gas release, helium is captured from fumaroles where steam from boiling water is caught in sample bottles. The percentage of helium atoms within the mixture can be measured to determine the quantity of helium. The image shown to the left is courtesy of  J. Lowenstern of the USGS.

With the rapid increase in helium, author Irene Baron states there appears to be more swarms of earthquakes in the Yellowstone area. Seismologists at the University of Utah reported in 2013 some earthquakes reoccur in the same area over time while other areas are new. It is believed the new ones “…may be induced by the intrusion of molten rock or hot pressurized ground (hydrothermal) water along pre-existing fractures.”  https://www.sciencedirect.com/science/article/abs/pii/S037702731300098X

After being informed the rising magma is only 2-4 miles beneath the surface, the general public has expressed apprehension. The USGS reports there is nothing about which to be alarmed. New research shows, “…  that while the magma reservoir is bigger than we thought, the proportion of melt to solid rock (estimated at <10-15%) is similar to previous reports and appears to remain way too low for a giant eruption.” https://volcanoes.usgs.gov/observatories/yvo/yvo_news_archive.html

If you are someone who loves to watch webcams, check out the ones at Yellowstone. Find them at:
https://volcanoes.usgs.gov/volcanoes/yellowstone/multimedia_webcams.html 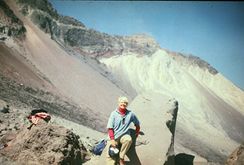 Author Irene Baron studied vulcanology at Portland State University with fellowships from the National Science Foundation. She has visited and studied numerous volcanic sites including :