The first meeting of the Zanesville Astronomy Society took place at Ohio University-Zanesville on the evening of 18 May 2013 with over 20-persons attending.  The university security gentleman had opened the Rogge Pavilion restrooms for us and turned off the outside lights to reduce light pollution. There was adequate seating on the covered pavilion patio for the 20+ persons in attendance. Ages ranged from seven to seventy-five.

The basic information concerning the fledging organization was discussed. Sky maps for May were distributed along with a sheet of red cellophane for participants to put on their flashlights to stop night blindness when using sky maps. One young man brought a refractor telescope. It was demonstrated for attendees. The difference between refractor telescopes and reflector telescopes was discussed. The astronomy applications for electronic devices were introduced. Suggestions as to which applications were most user-friendly were made for persons wishing to make guided observations from their home. I suggested lawn chairs in the back yard or on the deck with a clear view of the sky along with popcorn and a beverage, just for fun.

The observatory holding the Lewis Telescope was unlocked. Safety precautions were addressed to protect heads with the low doors and moving dome edges. The university had applied a rubber to the moveable dome edges to alleviate sharp edges.

The dome was opened and moved to the first quarter Moon position. Everyone was brought into the observatory a few at a time to learn about the Newtonian Cassegrain telescope construction.

I assumed that when the telescope was installed, it was adjusted and ready to use. We all know what “assume” means. I quickly found the two spotting scopes were BOTH not calibrated. The weights allowing for easy movement of the telescope to create a counterbalance were not correct.  During the move to the university, the counterbalance weights were moved to the base of the weight column. I didn’t have the tools to readjust them, which would have taken some time. When the telescope was set, if not held, it would move earthward 8-10-inches. What a disappointment for everyone that we couldn’t use the main telescope. Most everyone wanted to know when we could meet again. I suggested during first quarter Moon in June.

On the following day, 19 May, I contacted Dr. Hudnell Lewis to ask whether I should make the adjustments to the spotting scopes and weights, or invite the university astronomy department to do so. Dr. Lewis graciously volunteered to work with me to make the telescope perfectly adjusted. He’s the perfect person to do so as he worked with it over 20-years. Additionally, I’ll learn what to do and how to do it, in case such adjustments are needed in the future. We will work with the telescope within the next two weeks.

Most everyone participating was excited to be there and become involved in such an education experience and organization. There were many smiles and anticipation of the next meeting when the telescope would be in working order.

I forgot to take a picture before some attendees left. Below are individuals who remained until I began to depart. I was pleased to see four of my former astronomy students. :-) 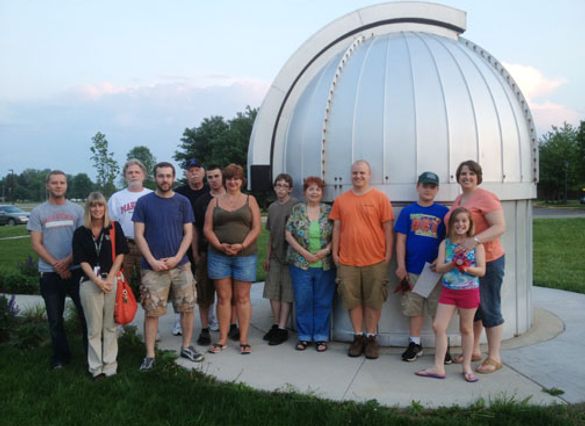